In Her Own Words:

“My name is Victoria and I have been Queen of England for over sixty-three years. I became queen in 1837 at eighteen years of age upon the death of my uncle, William IV, King of England.
After my coronation in 1837, many people in England were not happy. Many people say that I have a rather strict and formal personality., a sharp temper, and a very stubborn attitude for getting done what I want done. To all of this I say. "Really"? These very qualities they dislike are absolutely necessary for a ruler to possess. I am now eight-one years, and I feel that I have done an excellent job as queen. The empire doubled in size during my reign and the people of the world are much better off because of it.” 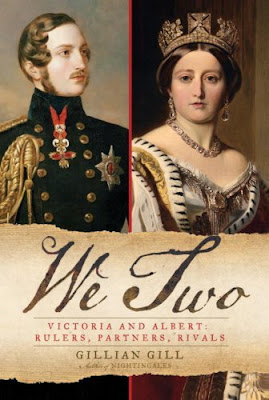 Victoria ascended the throne at a time when the United Kingdom was already an established constitutional monarchy, in which the king or queen held relatively few direct political powers and exercised influence by the prime minister's advice; but she still served as a very important symbolic figure of her time. 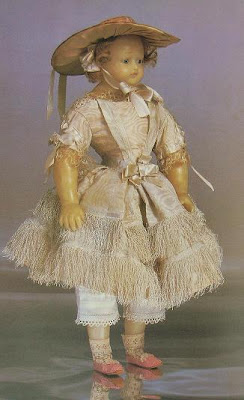 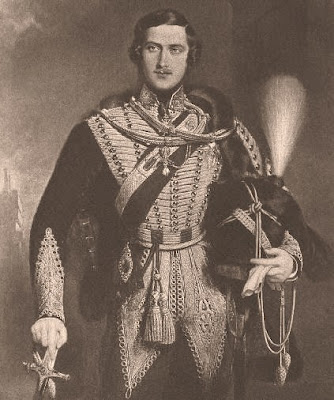 Victoria never lost her early passion for Albert: "Without him everything loses its interest"
Prince Albert as a father was a strict disciplinarian, and in Queen Victoria's eyes he could do no wrong, as she stated in a letter to her oldest son Albert Edward:…None of you can ever be proud enough of being the child of such a father who has not his equal in this world - so great, so good, so faultless. 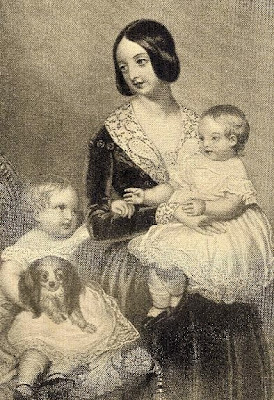 Despite conflicts produced by the queen's recurrent fits of depression, which usually occurred during and after pregnancy, the couple had a happy marriage. Victoria, however, was never reconciled to the childbearing that accompanied her marital bliss — the "shadow-side of marriage," as she called it. 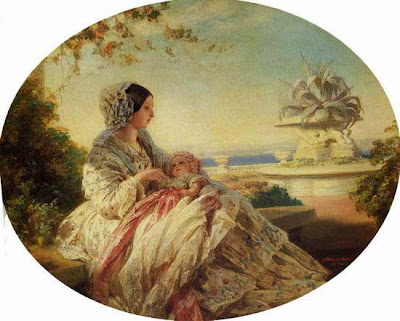 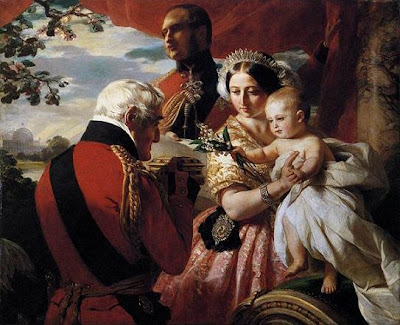 Queen Victoria wearing "The Diamond Fringe Tiara" a graduated circle of diamonds made in 1830. It was inherited by Queen Mary when she married in 1910. It was then inherited in 1937 by her daughter-in-law Queen Elizabeth, "The Queen Mother." She in turn gave it to her daughter as (something borrowed) Queen Elizabeth 2nd for her wedding to Philip. Queen Elizabeth then loaned it again to Princess Anne in 1973 for her marriage to Captain Mark Phillips.. 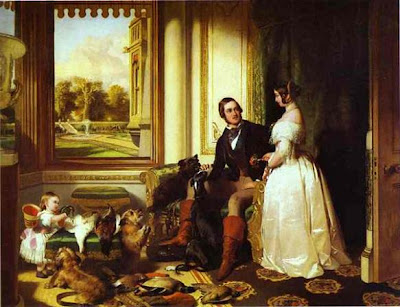 A visible sign of the prince's power and influence was the building of the royal residences of Osborne, on the Isle of Wight, and Balmoral Castle in Scotland where she was the happiest. The royal pair and their family were able to live there with the greatest ease. The royal couple's withdrawal to Scotland bore witness to a new sort of British monarchy. 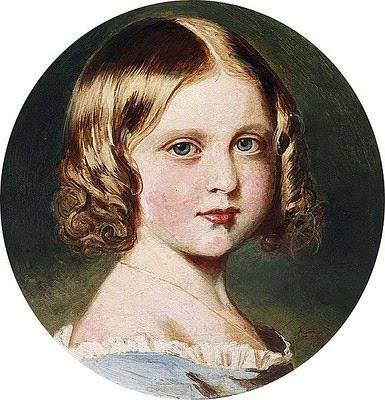 Princess Louise, "The Duchess of Argyll," painted by Queen Victoria from a miniature portrait. 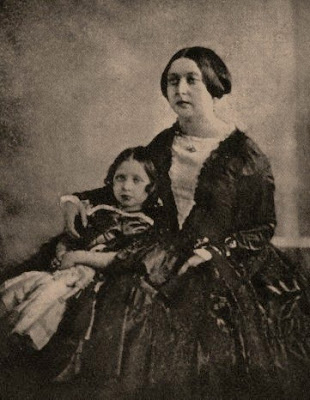 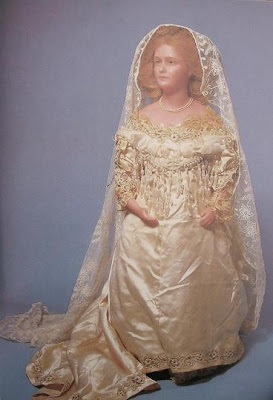 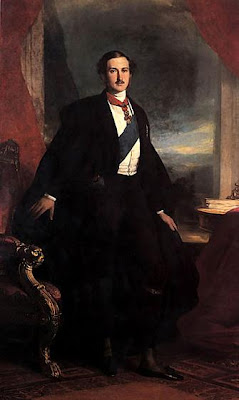 Albert wasn't popular among the British people, and he wasn't granted the title of Prince Consort until 1857, but his influence probably helped avert war between Britain and the United States after he intervened during a diplomatic row in the autumn of 1861. 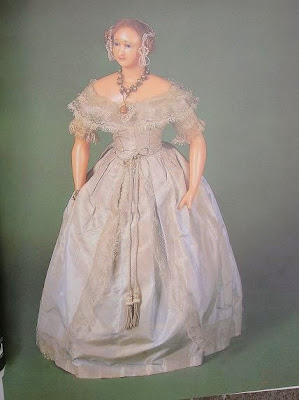 This regal English poured wax portrait doll of Queen Victoria sold for $1,700 against her pre-sale estimate of $1,200/$1,600. She is circa 1860 in her original gown. She is from the Estrid Faurholt collection, which became the "nucleus of the Legoland Museum. 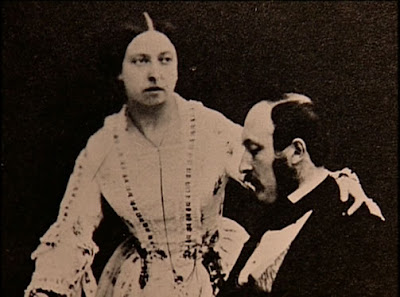 In their quest for privacy and intimacy Albert and Victoria adopted a way of life that mirrored that of their middle-class subjects, admittedly on a grander scale. She enjoyed the novels of Charles Dickens and patronized the circus and waxwork exhibitions. 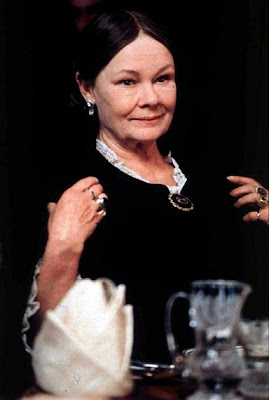 "Mrs Brown" Judy Dench as Queen Victoria ca. 1997
Perhaps the most famous quote attributed to Queen Victoria is,
"We are not amused"
The term "Victorian often refers to a priggish attitude toward sexuality or morality, though is also applied widely to refer to a period of literature, art, clothing and even architecture. 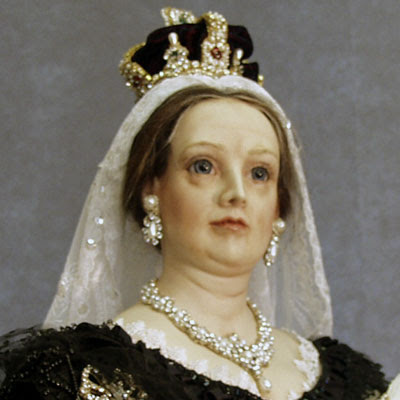 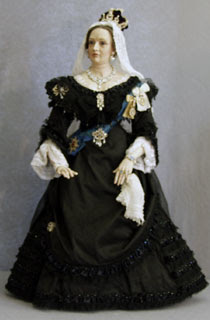 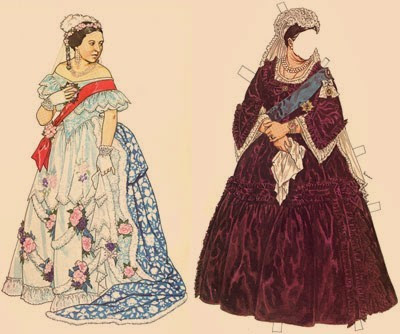 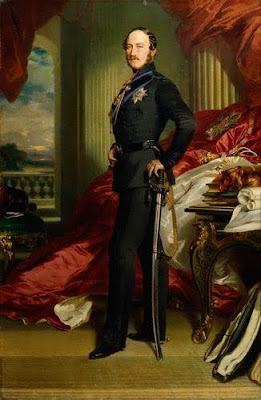 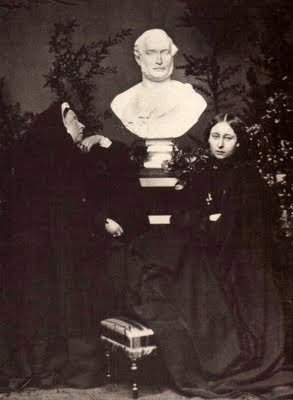 For many years after Albert’s death Victoria lived in relative seclusion, which alienated her from her subjects.
She continued to wear the black of mourning for the rest of her life, which no doubt contributed to her reputation of being stern and humorless. . 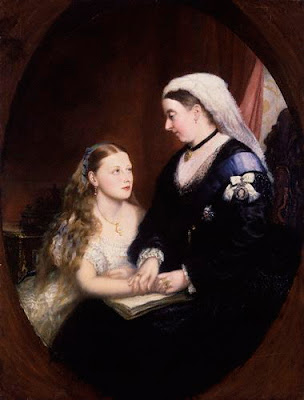 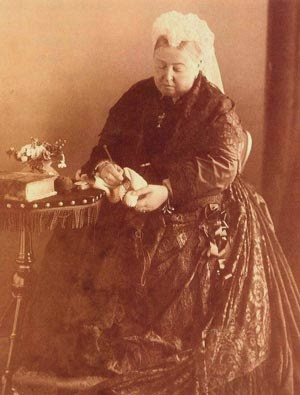 She is now no more—no more? Nay, I boldly say she lives—lives in the hearts of her subjects; lives in the pages of history. And as the ages revolve, as her pure profile stands more marked against the horizon of time, the verdict of posterity will ratify the judgment of those who were her subjects. She ennobled mankind; she exalted royalty; the world is better for her life.

"Sir, the Queen is no more; let us with one heart say, Long live the King!" 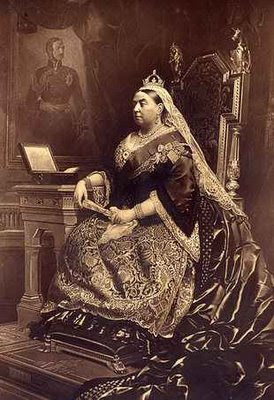 The Times January 23, 1901
Our beloved Queen has passed to her Rest

"The dreaded blow has fallen, and a world-wide Empire mourns its irreparable loss. Our beloved Queen, full of years and honour, has passed to her rest. There are no words to express the general grief, the universal sense of national and personal bereavement, awakened by the event which it is our melancholy duty to chronicle today."

She died there from a cerebral hemorrage on Tuesday 22 January 1901 at half past six in the evening, at the age of 81. At her deathbed she was attended by her son, the future King. She was dressed in a white dress and her wedding veil, and the coffin was draped with the Royal Standard that had been flying at Osborne House. 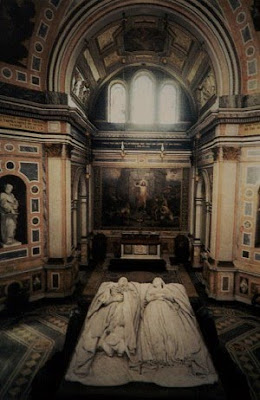 The death of Queen Victoria and the succession of her son, Edward, marked the start of a new century and the end of the Victorian Era. QueenVictoria was the last British monarch of the House of Hanover; her son King Edward the VII belonged to the House of Saxe-Coburg and Gotha.
Posted by Dolls from the Attic at 5:34 AM