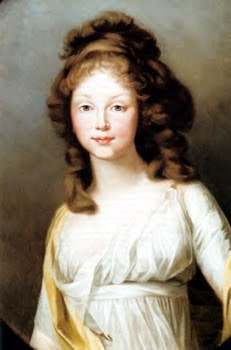 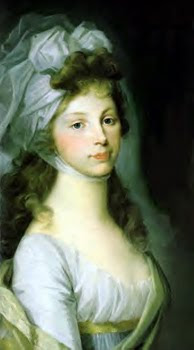 Princess Louise was born on March 10, 1776 in Hanover, Germany, the daughter of Prince Charles of Mecklenburg-Strelitz. Early in 1792, when Louise was 16, her uncle, hoping to strengthen the ties between his family and the Prussian royal family, carefully plotted a meeting between Louise and Crown Prince Frederick William III. The plan worked, and they married. 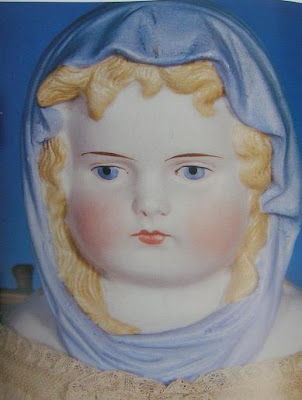 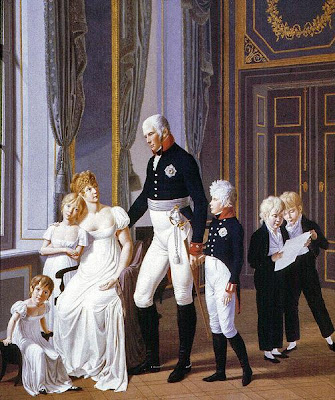 Louise with husband and children by Heinrich Anton Dahling ca. 1806

The Prince became King when his father died in 1797, and the beautiful and family-oriented Louise saw it as her duty to support her husband in all his endeavors. Meanwhile, the nation was charmed by the young Queen's grace, beauty, and wit. Historians have commented that Queen Louise was Prussian nationalism personified. 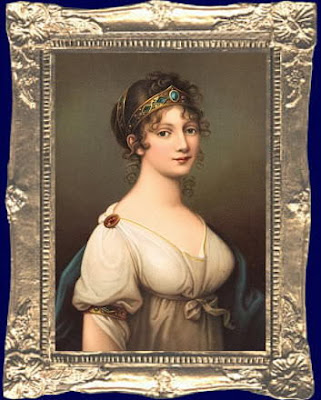 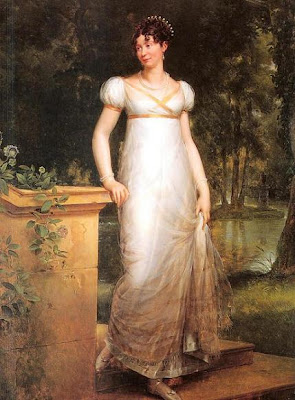 In 1804, with Napoleon's increasing violations of Prussian treaty rights, Louise (formerly ignorant of foreign policy) began to argue with King Frederick over his long-standing position of neutrality, pleading with him to break off all relations with the French Emperor. 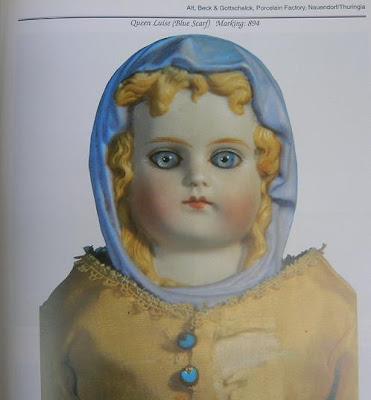 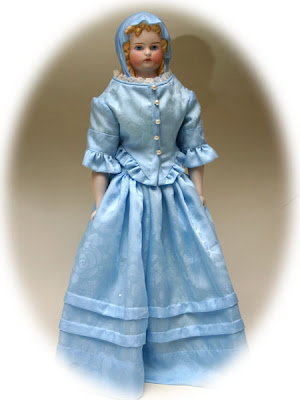 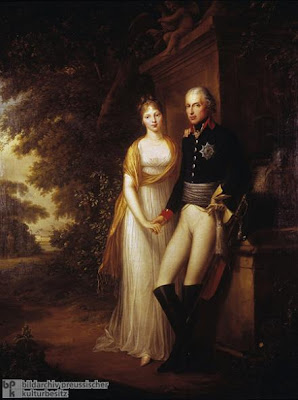 She took the initiative of contacting the Tsar of Russia and Emperor of Austria, both of whom, along with Frederick, signed the Potsdam Treaty on November 3, 1805--a treaty which allied these three nations against Napoleon. 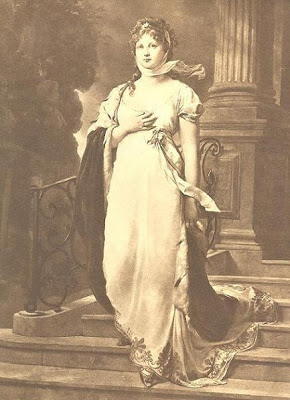 Napoleon termed Louise "My beautiful enemy" for her role in forming this alliance. 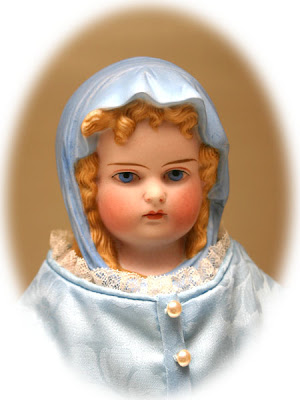 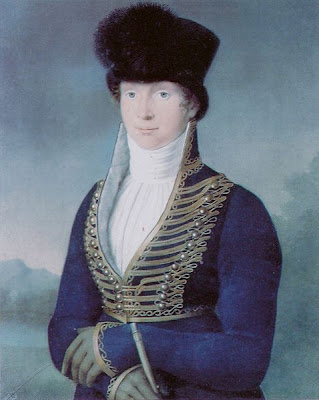 Louise in a riding habit by Wilhelm Ternite ca. 1810 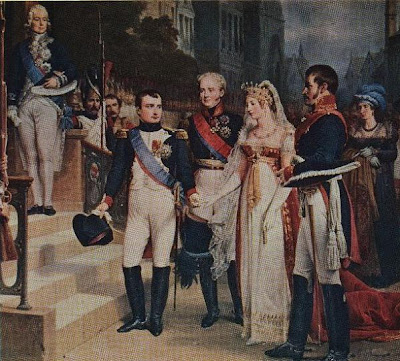 Napoleon receives The King and Queen of Prussia at Tilsit...Nicolas Gosse.

Napoleon eventually gained the upper hand over his enemies in battle. In 1807, both Louise and the King were forced to meet with Napoleon in person at Tilsit in Russia to sign a peace treaty. 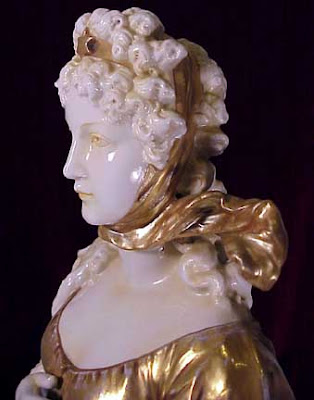 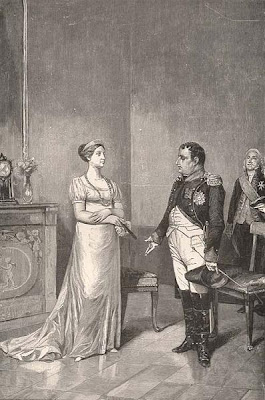 The stipulations of the treaty for Prussia were humiliating, and Louise felt discouraged. However, recognizing that her country depended upon her for moral strength, Louise regained her sense of optimism. She spoke of preparing her eldest son for the throne, even as Napoleon gutted her country. 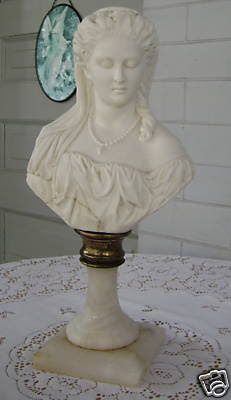 Parian and Marble statue of Louise. 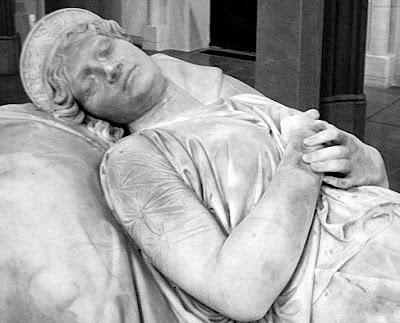 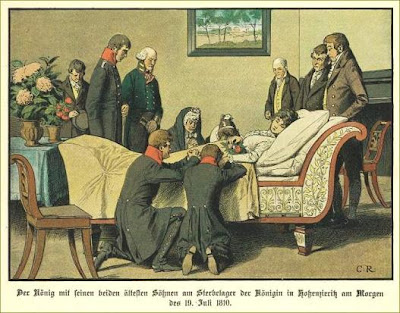 Louise died in her husband’s arms on July 17th, 1810 from an unidentified illness  Sadly, she did not live to see either Napoleon's defeat in 1815, or the reestablishment of the Germanic Empire under Prussia just a few years later. 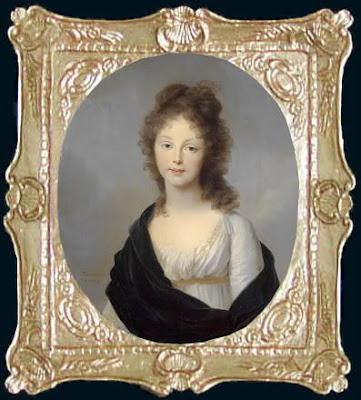 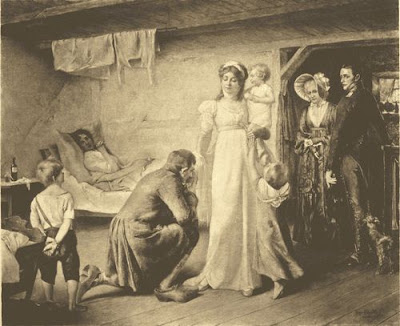 Queen Louise was not only characterized by great personal beauty united with dignity and grace of manner, but with much gentleness of character and active benevolence. Her visits of charity were extended to many homes of poverty and suffering. 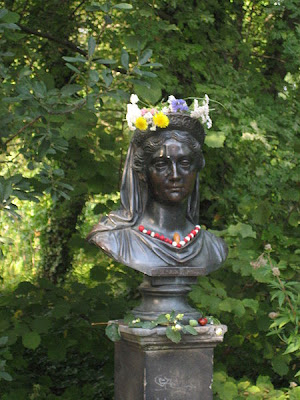 The Prussian order of Louise, the Louise School for Girls, and the Louise Governesses’ Seminary were instituted in her honor. In 1880, a statue of Queen Louise was erected in the Thiergarten at Berlin.
Posted by Dolls from the Attic at 9:51 AM