The Dolls of Egypt, Greece and Rome 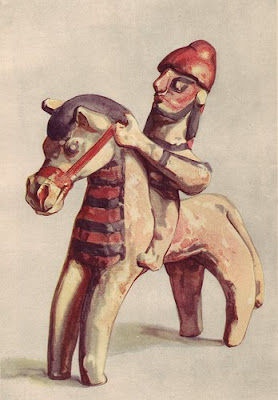 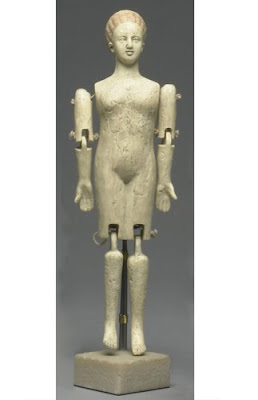 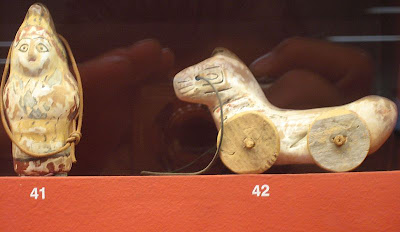 Egyptian dolls constructed of flat pieces of wood and painted with various designs, have often been found in Egyptian graves dating back to 2000 BC. The wood was cut into a simple paddle shape decorated with hair made from clay beads strung into ropes.
Greek dolls surviving examples, show they were made out of clay, ivory or bone. There is a story that Plutarch mentions the fact his two year old daughter, that was not to survive childhood, loved her doll so much that she begged her nurse for milk for the doll, as well as herself. In the custom of dedicating toys at a temple when the child reached puberty, ensured the survival of dolls on such shrines. A child's doll might be dedicated to Hera, or Aphrodite...
"O Aphrodite, despise not my doll's little purple neckerchief. I Sappho, dedicate this precious gift to you"
Roman dolls were made of terracota or bone. Some of these were found in tombs, which raises the question as to whether the figure is really a doll or some sort of grave companion. A doll might have accompanied Roman girls in the grave much as effigies were placed above the grave at a later period...At Herculaneum, a little girl's figure with a doll tightly clasped in her hands was discovered under the ashes and lava that destroyed her city.
Dolls have not only been found on the graves of young pagans, but also in the catacombs accompanying young Christians.
Posted by Dolls from the Attic at 11:25 AM