Origin of the Term "Milliner's Model Doll"...What's in a Name? 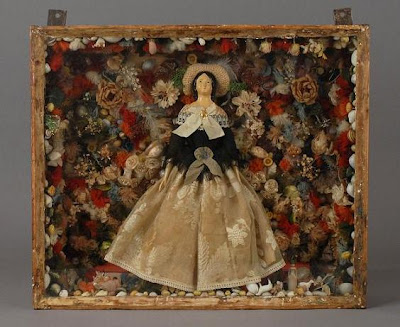 “That which we call a rose…By any other name would smell as sweet."
Shakespeare, Romeo and Juliet.
12" Milliner's Model Doll in shadow box filled with dried flowers, feathers and sea shells.
The dolls is wearing her original costume that includes a knitted hat. Shadow box retains original hand rolled glass front. 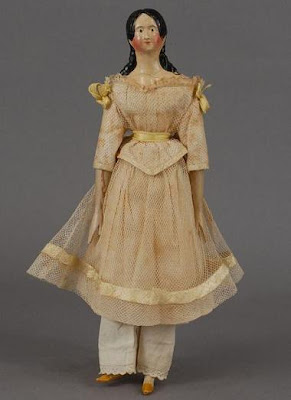 German Papier Mache with moded ringlets and painted swirls of locks down her back.
ca. 1835-40 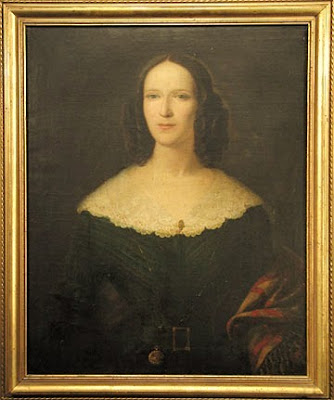 "Young Woman with Jewelry" Note the similarities with the hairstyle of the doll featured above. 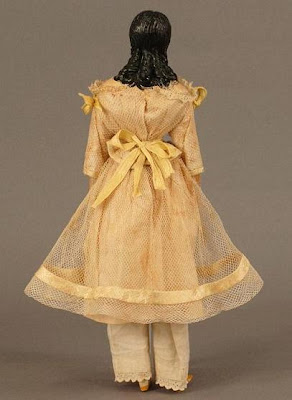 The first mass-produced molded papier mache heads were introduced at Sonneberg Thuringia in the early 19th century. At this time the German toy trade was expanding to embrace a world market. Papier mache heads were used extensively on a body made of fabric or leather, with the characteristic bands of leather neatening the joints of the wooden, or papier mache lower arms and legs. 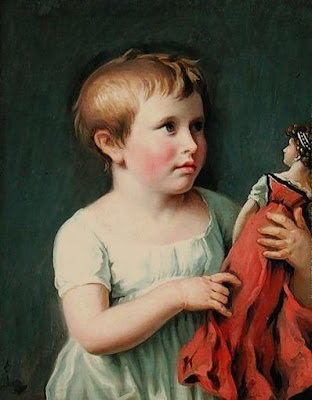 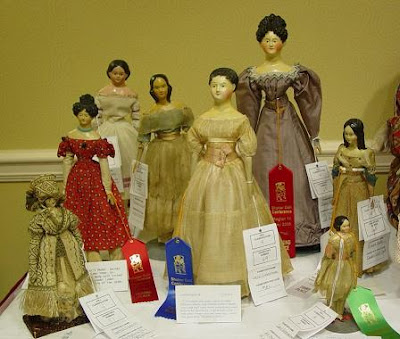 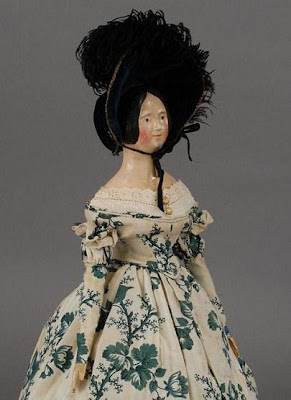 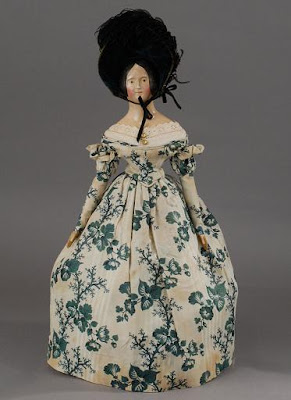 Beautiful 17" Kestner Milliner's, wearing a period bonnet of forest green silk velvet, featuring an ostrich plume. The doll's attire is a chintz print, with a rich deep green over cream background. Wonderful styling of the sleeves. 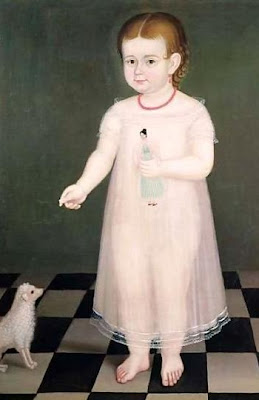 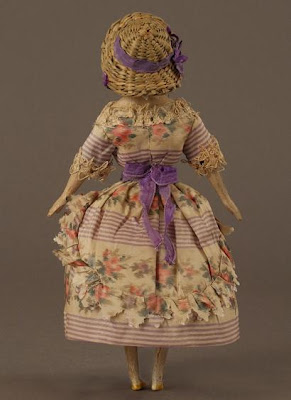 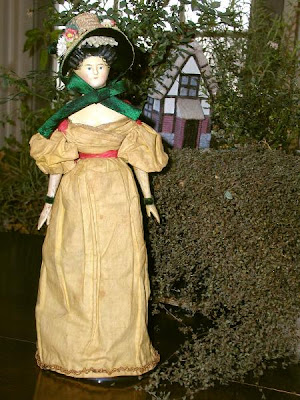 This Papier Mache doll is all original. She can be dated to the end of the first decade of the 1800s. Her hairstyle is the fashion of the late teens and early 1820's with its multiple side curls and its braided top knot. She has painted tendrils along the side of her face. Her body is leather with wood hands and feet attached with paper bands. She is 12 inches tall with her hat . 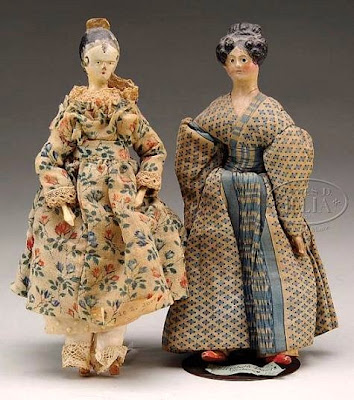 The origin of the term “Milliner’s Model Doll” has only been speculated about;
“In the twentieth century, Eleanor St. George named this type of doll ‘Milliner's Model’. Her correspondence indicates that this was a name she created without historical documentation or precedent for it." - Coleman
According to St George “The small Milliner’s dolls or Coiffure dolls ranging from sizes 6 to 20 inches, were designed as a dressmaker’s doll, resembling ladies modeling the latest fashions in clothing and coiffures, and were not intended for play. After they had served their fashion purpose, many found their way to the nurseries to serve as play dolls.” 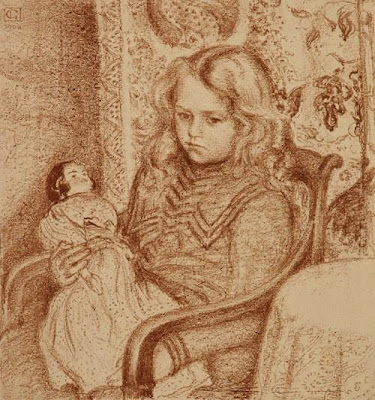 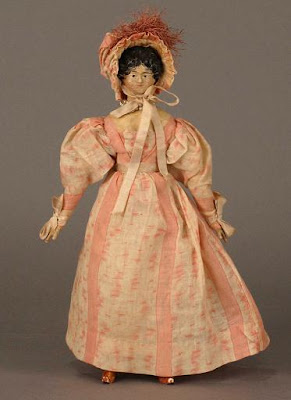 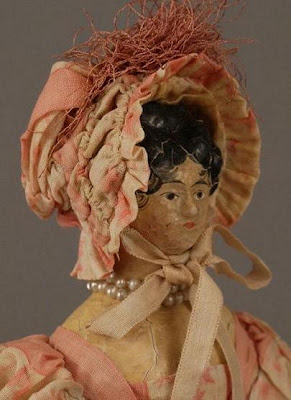 There is much confusion over the terminology for dolls. According to John Darcy Noble these dolls could never have been used for the purpose of a dressmaker’s model for several reasons:
1. They were too small to use as patterns
2. The clothes were not in fact effectively removable for making patterns
3. The dolls themselves are difficult to dress and undress due to the stiff bodies and odd hairstyles
4. There is no record of these dolls being used for this purpose. 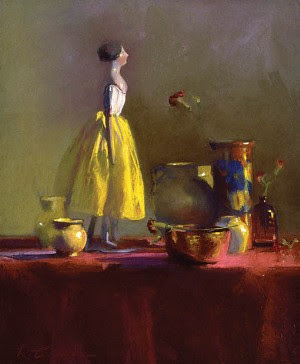 They are also referred to as "Varnished Heads" in the 1829-1833 Day Book of Lewis Page at the Henry Francis du Pont Winterthur Museum, and according to Christiane Grafnitz, the proper term for the Milliner type dolls are German Papier Maches with wooden arms and legs. 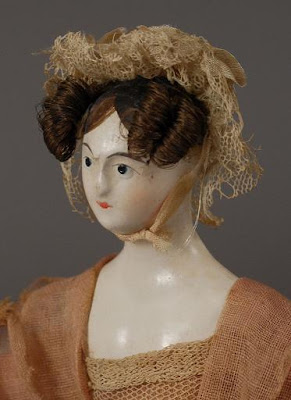 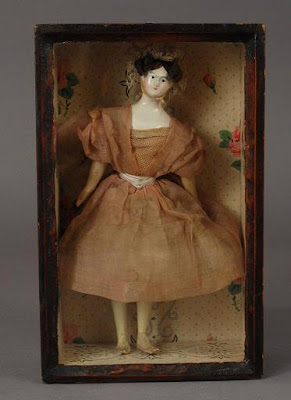 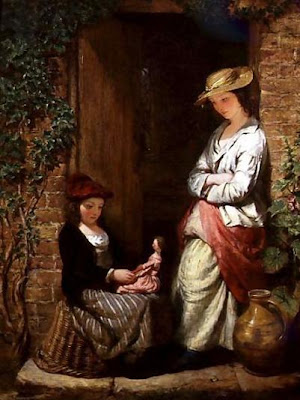 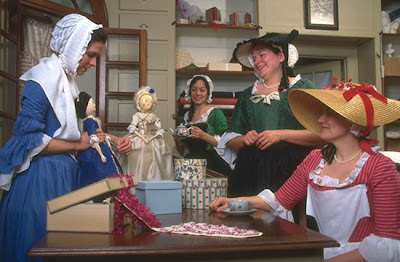 "At the Millinery" Williamsburg, Va.
The name Milliner’s is a misnomer as they were never intended to be hat models, as it is hard to believe how these petite dolls with impossibly elaborate molded hairdos could ever have modeled hats.

Many German dollmakers made Papier Maches that greatly resembled China dolls. Some fashion dolls from the mid-1800s were made in France (predecessors to the later French bisque and china dolls). Later, some of the German Papier Mache dolls resembled their bisque sisters.
I would highly recommend Gregory LeFever’s article: “Milliner’s Models, or Varnished Heads”, on the “Early American Life” magazine issue, of April 2010 on the subject of these dolls. It was a great source of information on creating this post.
Posted by Dolls from the Attic at 2:16 PM