From the home industry of the Groden Valley, Grodner Tal and South Tyrol, came the little peg wooden dolls. These are some of the oldest surviving dolls. Although the term peg-wooden refers to a jointing technique the term came to be synonymous with lathe turned dolls from these areas of the Alps. They were the inexpensive play dolls of generations in both Europe and America.
Most of the dolls had combs carved into their heads-hence the term Tuck Combs. Their heads and bodies were lathe turned as one piece and had simple peg joints, but the larger dolls had ball joints and even swivel waists. They had elongated graceful proportions, nicely carved details, painted slippers and sometimes with wood pendant earrings.
The hair is usually painted with curled bangs. Once painted and varnished they were ready for whatever adventures their little owners could conjure up. They are often referred to as German Tuck Combs, probably because they were sold in the German Nuremberg Toy Market, and sometimes incorrectly they are called Dutch dolls but this was a mispronunciation of the word Deutsch. 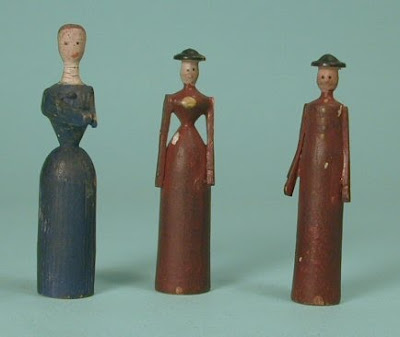 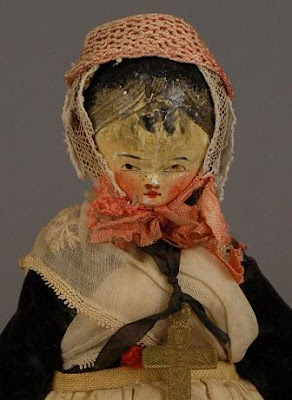 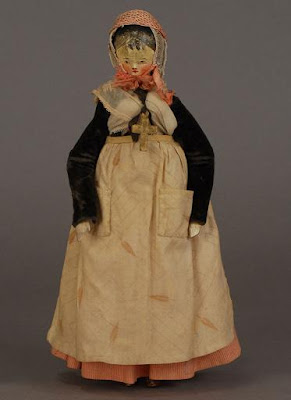 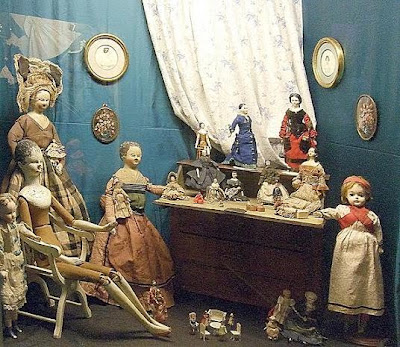 Wooden Dolls from the First and Second Empire. Notice, sitted in the armchair, a Grödner Tal. She is the oldest doll of the Museum.."Musee de la Poupee de Paris" 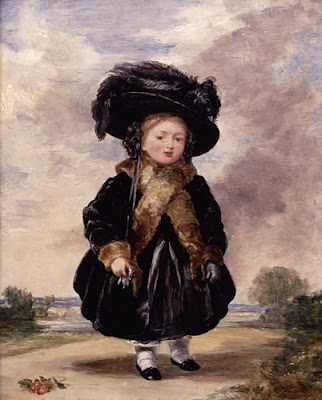 The lonely little princess Victoria played with dolls until, at fourteen, she had to put away childish things to prepare for the heavy responsibilities of her future. Everyone of her 132 dolls were wooden dolls of this same type, differing only in size from 3 to 9 inches.

The book “Queen Victoria’s Dolls “ describes them: “There is the queerest mixture of infancy and matronliness in their little wooden faces, due to the combination of small sharp nose and bright vermillion cheeks; With broad placid brows, over which, neatly parted at each temple, are painted elaborate, elderly grayish curl. The remainder of the hair is coal black and relieved by a tiny yellow comb perched upon the back of the head.”
All dolls were dressed by the princess and her governess, Baroness Lehzen. Costumed with minute attention to detail. It is probably the most famous collection of dolls in the world. 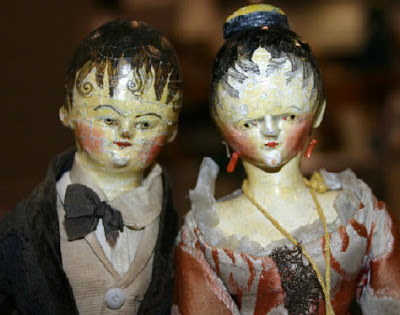 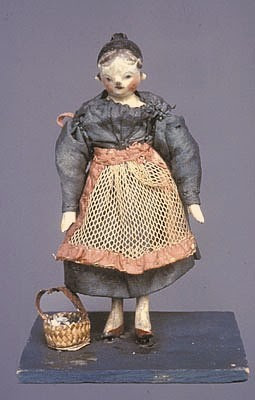 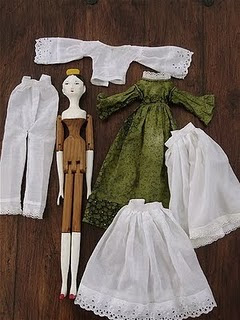 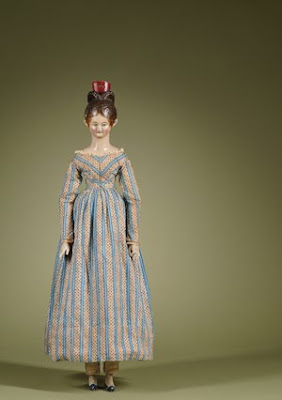 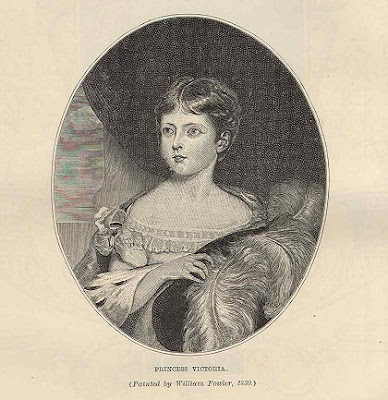 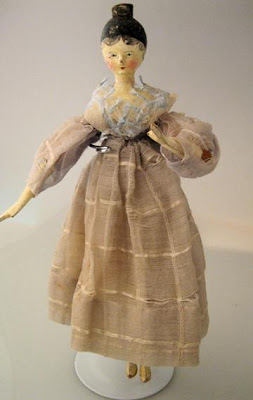 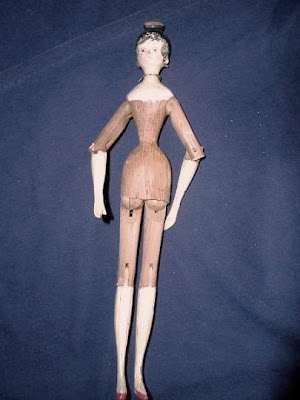 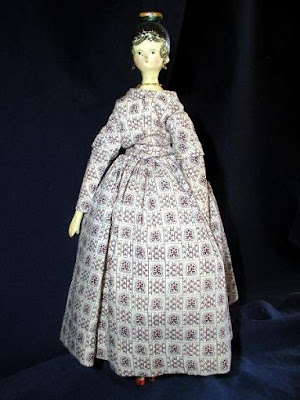 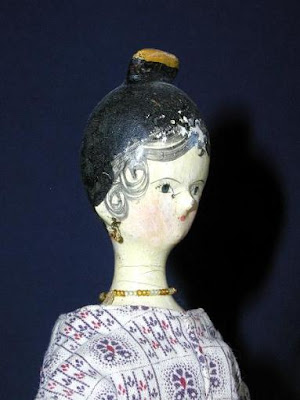 This wooden doll from the Grodner Tal of Bavaria dates from the 1820s. Her carved hair has the classic tuck comb. Unlike most tuck combs which are painted yellow this one is painted gold. She also has many painted curls. She is unique with her original earrings and necklace. Her body is peg wooden with ball jointed hips. Note the peg jointing of the shoulders allowing movement in two planes without a ball joint. Her early cotton gown has the characteristic V bodice of this time period. She is 12 inches tall. 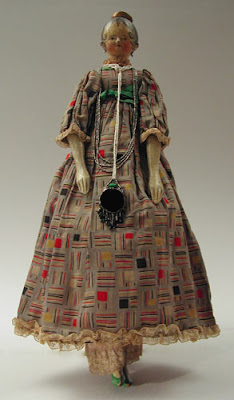 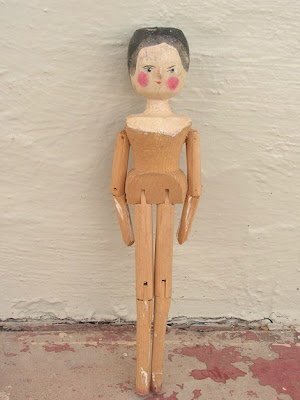 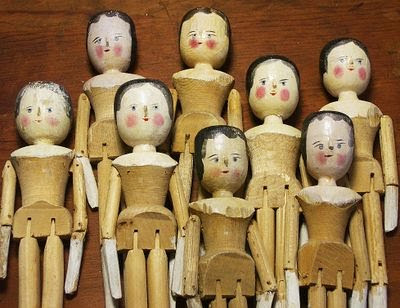 The slim waisted Grodnertals with their haughty faces and elegant air were the last of the quality wooden dolls produced in Europe.
Unfortunately the doll quality rapidly degraded into mass-produced dolls with quickly carved minimal details. They no longer resembled ladies, their bodies now were skittle shaped with flat backs, the arms show no shape being merely a stick with pink paint. But in the treatment of the head, is were the greatest difference between the Grodnertals and the newer versions lies.
The latter have simple round heads with the hair painted on, whereas the earlier dolls had hairstyles that involved carving and ornamentation.
Today there is a strong stigma against wood dolls in this region. Generally wood dolls are only seen as cheap souvenirs and now is almost an insult to ask a talented Groden Valley carver to create a wood doll. Today the serious carvers in this region devote their efforts to their famous religious sculptures. 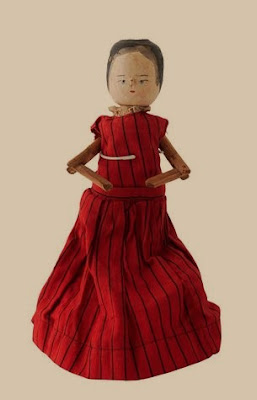 By the 1830s a new type of material was used to make dolls, glazed porcelain. The factories of KPM in Meissen and Berlin, as well as Royal Copenhagen in Denmark and Rorstrand in Sweden, made china dolls that have been unrivaled. The growing middle class and upper class market for dolls shifted from the decreasing quality of the wooden dolls to the “new and improved” china dolls created in other parts of the world now available to a larger market due to the improved communication and transportation.
Posted by Dolls from the Attic at 6:44 AM