Those Frills, and Flowers, and Buttons and Bows...

The term ‘milliner’ comes from the Italian city of Milan, where in the 1700’s, the finest straws were braided and the best quality hat forms were made. 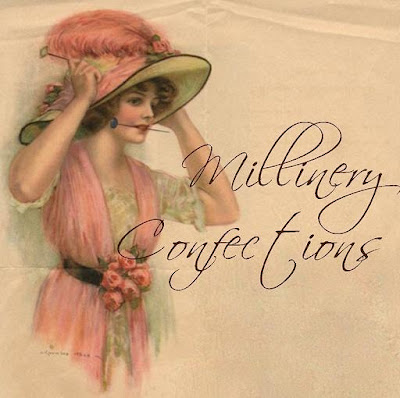 During the 18th century, milliners took the hat-making art out of the home and established the millinery profession. Today, a ‘milliner’ defines a person associated with the profession of hat making. In the 18th century however, a millinery was more of a stylist. 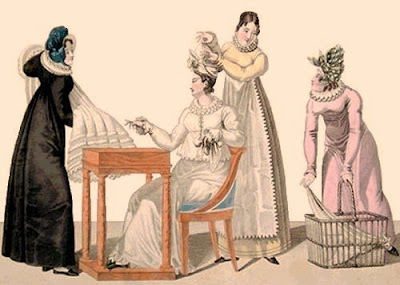 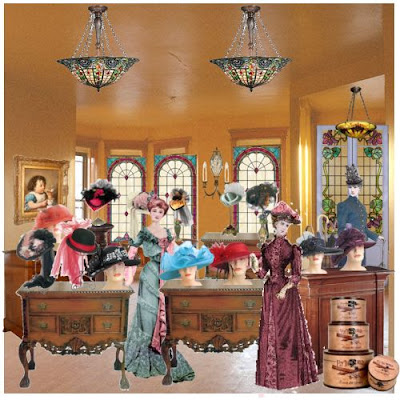 Hats were extremely important during the Regency era and no woman, whether servant or mistress, would dream of being seen outside the home without something on her head! 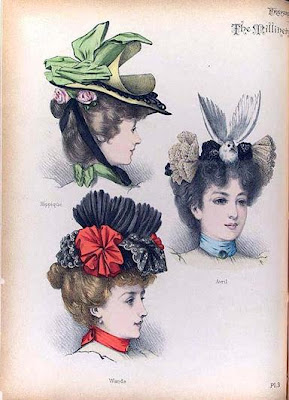 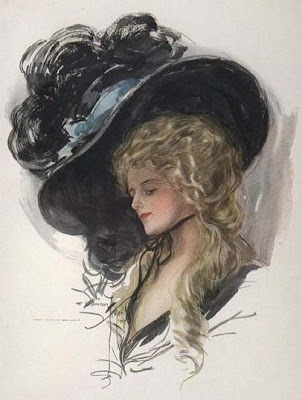 The millinery trade rapidly brought hat-making to the level of a personalized art form. Whether it was an upscale boutique in Paris, or a small shop on the plains of the Midwest, the milliner designed hats specifically for each individual customer, turning out creations that emphasized or exaggerated the personal characteristics of the wearer. 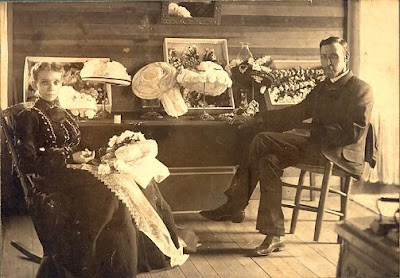 Straw hat making was a cottage industry and gave work to hundreds of women. The pay, as for other female workers, was low.
Department store managers were only starting to realize the value of employing women in retail sales -especially in dealing with a store's female clientele. Women were attributed with having more tact and accuracy in serving customers needs, and the fitting of new garments was greatly simplified. 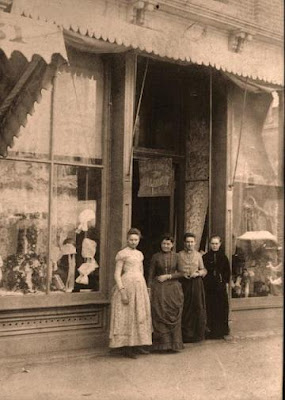 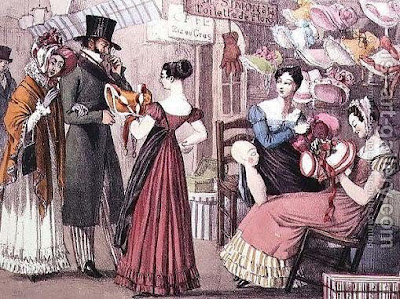 As a result, millinery shops, which dealt almost entirely in ladies hats, gloves and other fine and fancy accessories, were to the ladies what the barbershop was to the men. 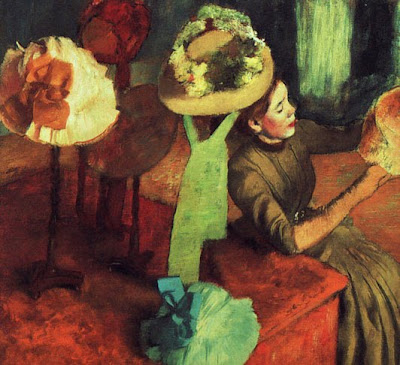 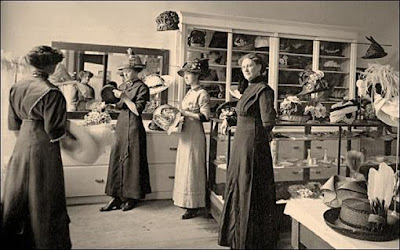 In earlier centuries, millinery was an important profession given the high demands for hats for daily wear, and formal occasions. It was additionally a profession that was held by many women; “hats made by women for women.” Being a milliner was thought decent and respectable employment for ladies of the 18th, 19th , and 20th century. 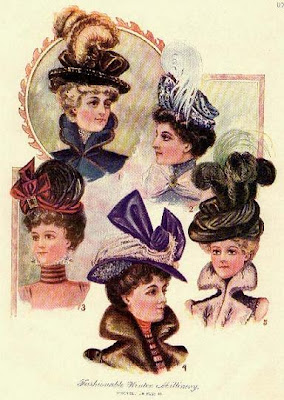 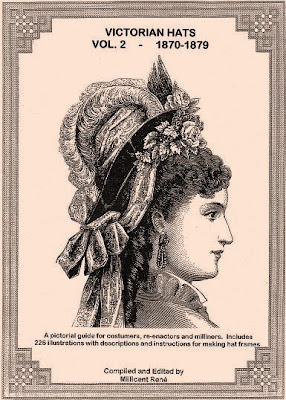 The term millinery is also used when referring to decorations of pre-made hats, such as the artful bow, the feather or ribbon added to a hat, is considered millinery. 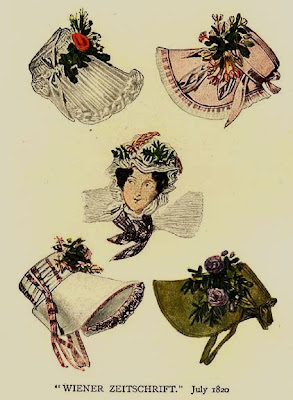 Even indoors married women and old spinsters would wear soft caps. As most women wore bonnets or capotte hats during the Regency, daytime hair styles were rather simple. 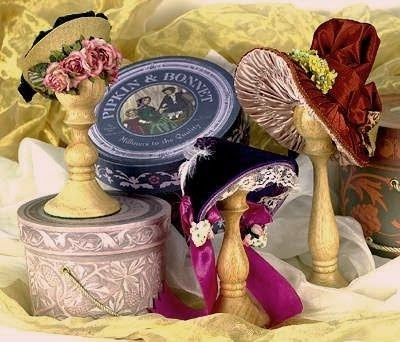 Bonnets differed from hats in having soft crowns but a stiff brim, sometimes made of straw. Caps were soft, made of fabric and often worn under hats. 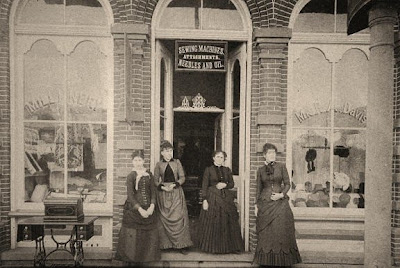 In a time that frowned upon women holding jobs and working outside of the home, millinery shops were one of the few economic enterprises that could be owned, operated and frequented by women with no fear of damage to their social respectability. 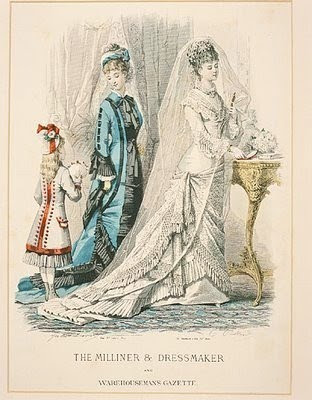 The early 19th century saw the fledgling beginning of the modern fashion designer. Up to this point a woman went to the dressmaker for her gowns, the milliner for her hats, gloves and other accessories were purchased from other shops. The fashion designer, on the other hand, offered the whole package. 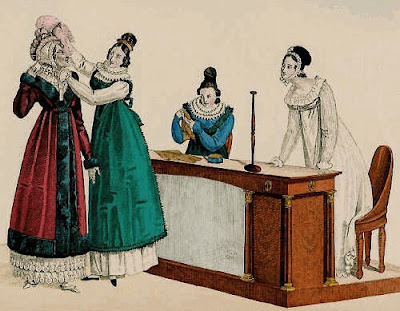 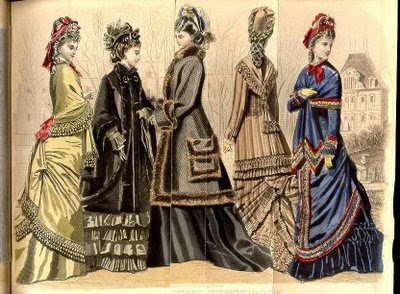 Traditionally a woman’s occupation, the milliner not only created hats or bonnets to go with costumes but also chose the laces, trims and accessories to complete an ensemble.
< 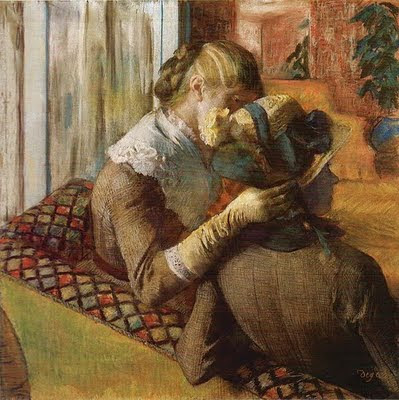 Straw hats could be trimmed only with flowers and ribbons for summer use. At other times straw hats where covered with silk, taffeta or similar material, showing nothing of the foundation material at all. 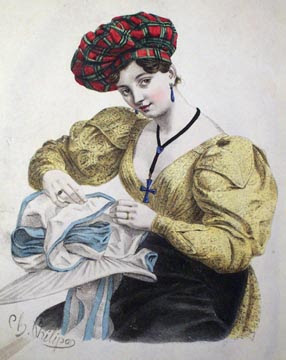 Over the centuries, hats came to the forefront of the millinery trade and by the 19th century most Millinery shops were in essence ladies hat shops with gloves and other fine accessories pushed to the smaller side counters as a relative afterthought. Throughout the history of fashion, hats served as the status symbol that delineated the line between the social classes through their use of material, decoration, and utility... (or the lack of it).

Posted by Dolls from the Attic at 6:10 AM

Labels: Milliner's profession from the 18th and into the 20th century