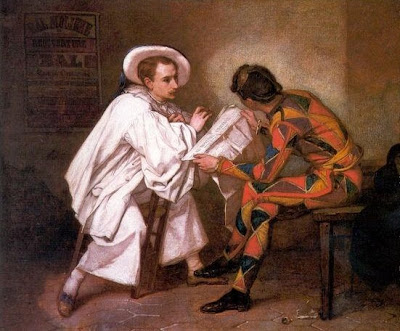 Wind up figures are theatrical to begin with, but when they are based on actual characters, they take on a magical appeal.
Commedia Dell’Arte, was a form of comedy played by actors skilled in the art of improvisation, but not all was improvised. The characters were based on traditional figures. Actors would take on the characters, and identified with their roles. Their character’s name often superseded their real names.

Pierrot: The most beloved and tenderhearted, pale as the moon and mysterious as silence.

Harlequins: An acrobat at heart, colorful, fast and flexible. Always having fun and leaving the work to someone else. Has a sardonic sense of humor. 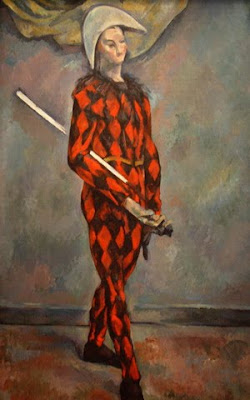 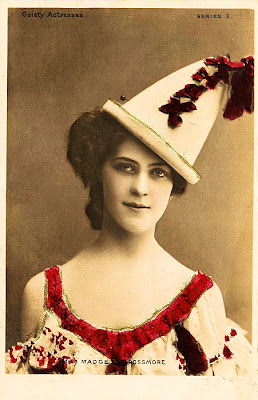 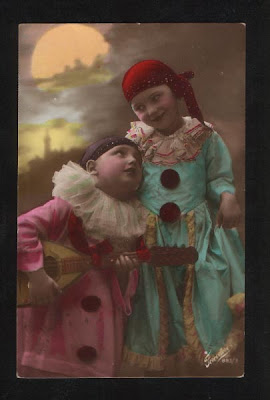 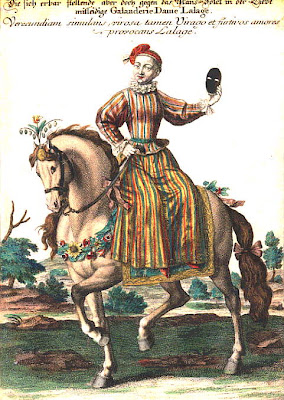 The decline of the Commedia Dell' Arte was due to a variety of factors. Physical comedy came to dominate the performances, because the rich verbal humour of the regional dialects, was lost on foreign audiences. As this mode became the routine, actors stopped altering the characters, so that the roles became frozen and no longer reflected the conditions of real life, thus losing an important comic element.
Commedia Dell Arte last traces entered into pantomime as it was introduced in England (1702). From there it traveled to Copenhagen (1801), where at the Tivoli Gardens, it still survives. However carefully copied their masks may be from contemporary illustrations; However witty their improvisation, -revivals of the form can only approximate what Commedia Dell’Arte must have been.
Posted by Dolls from the Attic at 4:39 PM