I'm all that's left of a bizarre childhood...

I always watched with anticipation when Richard was featured on The Antique Road Show, and I never failed to gain something of great value from his vast knowledge.
It was exciting when Richard was asked to identify the history of some rare doll, and how very down to earth, and unassuming… He made his findings interesting and informative.

I admired him as a teacher whom indirecty nourished my love for antique dolls, and inspired me to express my passion on this very modest way.
An extremely likable man I would’ve love to meet.…A man of many attributes, an artist, teacher and collector since he was ten years old.

I was lucky to find this article written by some of his friends, telling endearing stories about the man they loved and of how much he is missed not only in the antique doll world, but to all the people that had the privilege of knowing him. I wish I had. 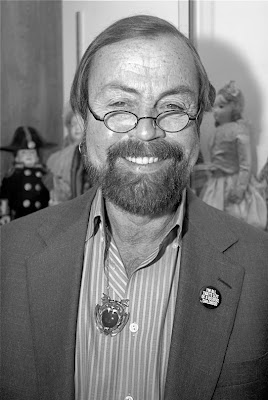 For 11 years Wright was also a popular Antiques Roadshow appraiser, known for his engaging, quietly authoritative onscreen presence, his spectacles tipped low on the bridge of his nose.
Richard Wright had a joie de vivre that was endearing to all who knew him. "Almost everyone has a Richard Wright story," but my favorite was the time a small tornado popped up out of nowhere and he called to describe the conditions.

He said the wind was howling, the lights were flickering, and the sky was green. There were tree limbs and even a cow flying past his window. He said it was like a scene from The Wizard of Oz.'
"I begged him to go down into his basement, but he didn't want to leave his prized Tiffany lamp unprotected. He was crouching over the glass shade, with the phone in one hand. Finally, he took the phone down to the basement and told me to wait.
A long time passed, and I could hear bumping and sounds of things being knocked over. Then he picked up the phone again. I asked him why there had been such a long delay - had the tornado hit?
He replied, ‘No, I had to go back upstairs for my glass of Merlot and cigarettes. I didn't know how long I'd be down here.' That was classic Richard."
Posted by Dolls from the Attic at 6:30 AM